SCIENCE FICTION – The Danish Fanzine” no. 15 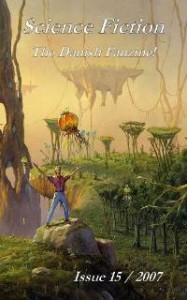 As many readers will be aware of, SF fan and editor Knud Larn has published a Danish fanzine called SCIENCE FICTION for a couple of years now, and the sad word is that no. 15 is the last issue of the fanzine, as Knud is moving on to other SF related projects. No. 15 is special in a number of ways, beyond being the final issue in the series. First, it contains only short stories – no reviews or other articles. As such it has the format of an anthology. Second, it was an issue prepared specially for Eurocon, containing contributions from a large handful of the international authors who visited the con. Third, being targeted for an international audience, it is in English (and so, therefore, is this review). Fourth, it is 232 pages long and appears in book form. Previous issues were printed as magazines, with a page count between 26 and 120.

The eighteen stories collected in this anthology issue are:

Gustavo Bondoni (AR): Tenth Orbit – The story of a long-lived energy creature far out in the solar system, which slowly awaits the eventual coming of human beings. Told from the creature’s point of view, cleverly describing familiar features of the solar system without actually naming them. Beautifully written, and very effectful.

Ruth Nestvold (US): The Other Side of Silence – A very wellwritten story about a woman using art to rebel against overpowering corporate corruption, in the process probably sacrificing herself. Beautiful imagery and a convincing and literary portrayal of social as well as technological dimensions of the future.

Richard Ipsen (DK): The First European Concert – A potent First Contact story where humans and aliens on Europa meet through the exchange of their respective works of art, especially music. One might call it a utopian notion that contact should take place with such mutual sympathy – but certainly a consummation devoutly to be wished.

W. J. Maryson (NL): Verstummte Musik – A story of a totalitarian future European Union, “Eurwest”, where there must be exactly 900,000,000 people – no more, no less. People earn points for ambition, generosity, industriousness and efficiency, and if they fall below a certain value at the annual review, they are executed. The dead are turned into bricks for the Palace of Humanity, but for a select few there is another way out… or is there? More cannot be said without spoiling it, but it is an at once sad and beautiful story about the slow death of the human spirit.

Robert Nielson (IE): Off Season – A pensive and effectively atmospheric story of doomed love between humans and (sentient?) robots on a holiday planet. Stays long in the memory.

Flemming Rasch (DK): The Dane in the Moon – A funny little story about a half-crazy Dane stranded on the moon, visiting the Moon Café, having Moon Beer, etc. Short but sweet!

Roberto Quaglia (IT): God Ltd. – A talkative and philosophical story about the nature of God (who isn’t Good!) and the afterlife, including a lot of violence and debauchery. Goes in many directions and isn’t enormously coherent.

Camilla Wandahl (DK): Vita Nova – Can you love a “soulless” clone bred to be an organ donor? And can such a clone love you back? Not a bad story at all.

Ovchinnikov Oleg (RU): The Problems With… – A very nice story about enigmatic aliens who can steal the vocabulary of humans. Inspired, but not brilliantly translated.

Erik Simon (DE): The Vaudeville Principle – A good alternate history/ time-travel story about a different outcome of WW2 which was then changed. Short, but full of great alternate-historical tidbits.

Mark von Schlegell (US): The Shakespeare – A weird, almost minimalistic story about what appears to be a robotic Shakespeare (but without much Shakespearean relevance, as far as I can see). The readers, it seems, are asked to imagine most of the setting and the context of the story for themselves, which I confess I found annoyingly difficult.

Stig W. Jørgensen (DK): 9/10 – A decent time-travel story arguing against the existence of paradoxes, despite time-travellers crisscrossing history. Not bad.

Frank Roger (BE): War, and Peace – A story of a war-torn future where peace sometimes breaks out, and dead people are resurrected, because time can be (temporarily?) reversed. Many funny images of time going the wrong way – and doubts as to which way it should go.

Harry Harrison (US): The Road to 3000 AD – A disappointingly tiny story (two pages) which sums up the major scientific achievements of the coming millennium, incl. a universally useful mathematical equation. Not too bad, but might have had more matter.

Sophie Boysen (DK): Moon City – A catastrophic virus-bacterium is discovered on the Moon…

Bruce Holland Rogers (US): Bitter Pills – In the future, the DEA is fighting the new drug Dreamrail which gives people sweet dreams. To stop people using it, they introduce a variant of the pill that gives people nightmares instead – but are nightmares actually better than facing a harsh reality? A thoughtful story the end of which you don’t see coming.

Ralan Conley (US): Galactic Exchange – A quite funny First Contact story where very “Alien” aliens try – almost in vain – to find something useful in human culture. Slightly contrived ending, but worth it for the comedic effect. Very entertaining.

H.H. Løyche (DK): Electro Cute – A topical story (or, a diatribe disguised as fiction – not that there’s anything at all wrong with that) about how emotionless pornography – particularly longdistance cybersex – undermines the essential human interaction that constitutes civilization. Definitely thought-provoking.

The three most memorable efforts, I would say, are those by Maryson, Bondoni and Nielson, with many of the others also containing a variety of grand and fascinating ideas. On a top-5, the next-best stories would be Nestvold’s and Ipsen’s.

The overall appearance of SCIENCE FICTION no. 15 is quite professional; the only serious flaw is in Ovchinnikov Oleg’s story, which features many grammatical slip-ups and not much sign of proof-reading. I just have to mention one other minor point of criticism, however: an out-of-control comma maniac seems to have been let loose in this book; virtually every story has too many commas, often (but by no means always) in places where they might be fine in a Danish sentence structure, but certainly aren’t needed in English. On page 203, for instance: “The general, and his wife did not embrace.” What’s that comma doing there? There are instances like this in practically every story – sometimes on nearly every page – so it must be the work of the editor or some very comma-happy proofreader. But it is not significant enough to seriously disrupt the reading experience, so it suffices to merely remind the guilty party to curb his or her comma-zeal in the future. Overall, a good anthology with many worthwhile contributions.

1 Response to SCIENCE FICTION – The Danish Fanzine” no. 15